The EIS-TIMEX end-station exploits the high intensity, energy range and time structure of the FERMI FEL pulses to probe fundamental properties of dense matter under metastable and/or extreme thermodynamic conditions with sub-ps time resolution. The basic idea is to exploit the high peak power of FERMI to induce an efficient ultrafast (< ps) and almost isochoric heating (up to tens of eV  or ~106 K range) followed by a slower (~10 ps) isoentropic expansion of bulk-like dense samples. The deposited energy induces a strong nonequilibrium condition characterized by high electron temperatures and cold lattice, typically followed by structural changes, phase transitions and, under specific conditions, even drive the Warm Dense Matter (WDM) thermodynamic regime. WDM is a poorly understood state of matter located between condensed matter and classical plasma, where the atoms/ions are strongly coupled to the dense electron plasma despite its high temperature. The understanding of WDM represents a real challenge for researchers, and it would be of great relevance for several applications, such as: inertial fusion, extreme-state chemistry, high-pressure research, etc.

Additionally, the high peak fluences that can be reached at the sample, together with the availability of a wide energy spectrometer, allow to exploit EIS-TIMEX for non-linear optical spectroscopies such as for example Sum Frequency Generation.

Other polarisation
All linear and circular polarizations available

Notes
The supercontinuum is generated by focussing the SLU fundamental in a 3 mm Sapphire crystal.
The 10 fs pulse duration can be achieved outside of the chamber by compressing with a pair of chirped mirrors. Chamber upgrades are currently being developed to deliver similar pulse durations at the sample.

Microscopes
Long range microscope with um resolution to look at the sample. 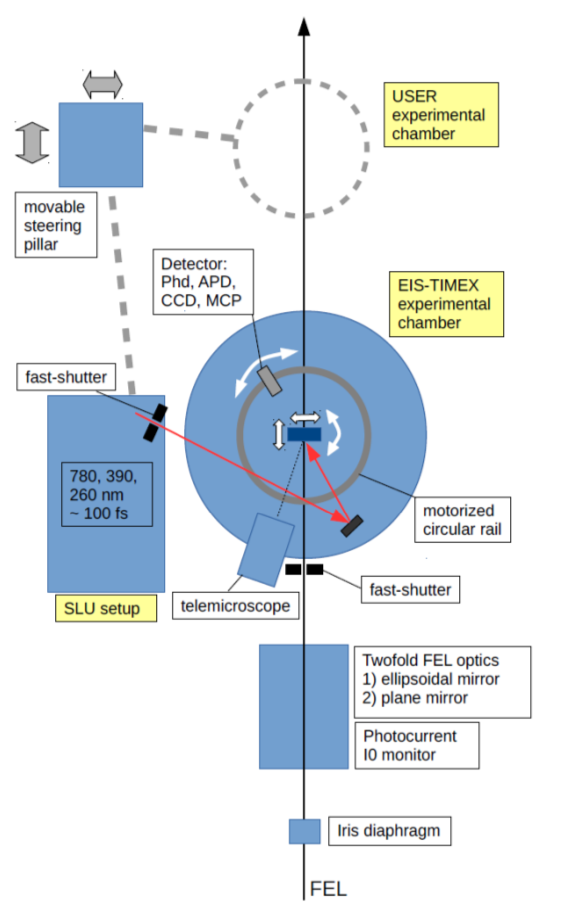